…then all at once he’ll do something wonderful.

I have seen The King and I more times than I remember. We borrowed the VHS from the library. Deborah Kerr’s golden silk taffeta and bare shoulders. Looking at the silk curtains cascading again, seeing the shimmering notes of Rodgers and Hammerstein ripple the redolent light of a Lincoln Center scrim (I wonder how they scent the air with sound the way they do.)

I sat beside Henry Moore’s figure reclining in the reflecting pool. Beneath the neatly attentive rows of trees, I read my book. The unseasonably warm weather presented the perfect opportunity to sit by the water, by the quiet and the gray.

When strangers approach you in public parks on warm days in New York City, you attempt to casually rebuff them and go about your business.

The trim, tweed-suited man spoke directly in a soft French accent, “Are you seeing ze show?”

“I have four tickets, very good seats,” he said.

While my mind weighed the need to see this production–I that had already seen–yet another time, another three hours, against the pages piling up on my desk, bed, sofa, bookbag, he pressed a ticket into my palm, flurried on while warning me that the show began in ten minutes, that I ought to claim my seat.

Tuesday in the dark

The glitter of lights in the dark plaza lets us pass. A woman from the School for International and Public Affairs, Diana, treads on the white gravel beneath the resolutely planted trees. Moore’s figure slumbers.

“The King and I offends Thai people,” my friend remarks on the subway as we return from BAM and Lev Dodin’s buffooned Cherry Orchard. An Italian who recently visited Thailand and taught me at Harvard, she wields a certain authority in distinguishing cultural insensitivities. Raised in politically-correct Massachusetts public schools, I tread carefully.

You’ll always go along, defend him when he’s wrong

And tell him when he’s strong…

“Rodgers and Hammerstein specifically chose conflicted topics. They address notions of empire. They highlight the barbarism of the ‘civilising’ agents, at least to some degree.” My answer feels caged and unfortunately cautious. “I could not not go.”

…as long as you live.

The water winks at Moore’s reclining figure. The surface of the sculpture reflects the wind on the water. Warm again, the weekend invites pedestrians to the plaza, and pigeons preen and poop in the reflecting pool. I awkwardly acquiesce to a stranger’s request that I photograph him and his son and grandson in front of the water and statue. In the same way that enormous art automatically implicates the body and scale of the human viewer, Lincoln Center’s domineering architecture seems to encourage human interaction. Perhaps the plaza’s solid structure silently assures us of each other’s safety. Could an institution of such magnitude and majesty serve as backdrop to criminal activity?

My friend accompanies me to peek again at the figure. He ponders the history of the plaza, the H. H. Richardson effect of many buildings built by one man. William Williamson? Henry Henryson? He cannot remember the architect. (Wallace Harrison says Wikipedia now, hours later).

And then we collide with Arthur who rushes back to Anna Netrebko after he tells us that no one at Harvard reads any more. More and more these worlds of art and music and theater spiral around me. The seeming solidity of intervening forms slant into shallow depths of a deceptive reflecting surface that casually reveals tossed in pennies, debris, and mundane mechanical wiring of the pool and statue. All those dirty thoughts litter the bed of the reclining figure. The humdrum necessities of space and traffic collect at the drain, even of modernist masters. Even if the surface only skims lightly over the noisome facts, the water unifies. It lets us look up by looking down. Poussin’s clouds’ vampiric invisibility pointed to a necessary ephemerality, an emphasis on changeability, Clark remarks. Riffled sheets of the reclined figure do not conceal, yet the shroud subdues the oppressive weight of administering marble.

The statue erect behind us, peeping over our shoulders, made us giggle. 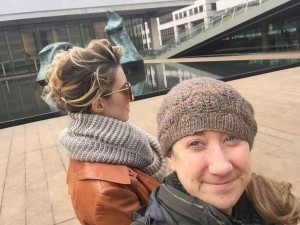