The past few of weeks I have been greatly anxious about my dataset. I experimented briefly with ManyEyes and spent some hours struggling to download all the appropriate versions of Java and Gephi. 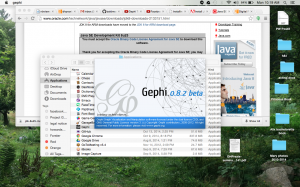 I went to Micki’s office hour last week to get set up with the things I had missed at DataVis workshop 1. She set me up with AntConc and fixed my java/Gephi miscommunications. She also gave me pointers on where to start and showed me her research and what she’s been doing with text analysis.

I’ve been largely dealing with concerns about what dataset to use. My just to muck around set was the full text of E.M. Forster’s Howards End pulled off Project Gutenberg. I looked at which themes happened where what two-word pairings showed up most often.

Simultaneously, I have been considering how to approach a DH project my art historian roommate needs to do. A post-doc at Columbia, she studies Dutch colonial art and has specifically been researching a specific street in Curacao. In light of Tod Presner’s HyperCities, I have been trying to decide how map the information that she has already accrued so that she can come to new conclusions about the shifts over time of these structures. I spoke with Alice Lynn about the possibility of using Omeka. She also brought up the idea of using Photoshop to put the photographs in layers and alter the opacity to visualize the shifts.

Also I’ve been attempting to learn the beginnings of HTML. On the whole I’m finding that there is always more than I can accomplish and I feel woefully remedial in almost all areas.

I have been trying to keep up with classmates’ blog posts and data projects and have found them only to overwhelm me more.

So I go to yoga to calm myself. Then I come back to my computer and chip away little by little.

This blog post will likely recede into the morass of time, but it’s at least a start to this process of recording some of my efforts that feel so Sisyphusian.